Theory at the Glance

Centrifugal compressors are dynamic machines with a wide range of applications (Oil&Gas up/mid/down-stream, natural gas processing, refrigeration, technical gas, air, etc.), working with any compressible fluid, either gas or vapor, having wide range of molecular weight, even if, when the molecular weight is lower, also the amount of pressure the centrifugal compressor can generate is lower. As it can be seen from the previous figure, centrifugal compressors range in volumetric size from few thousands to 3÷4 hundred thousand m3/h. At lower capacities they have problems competing with other more efficient volumetric compressors available; at higher capacities axial compressors perform better. Inlet pressure level can be any value from a deep vacuum to a high positive pressure. Pressure ratios and pressure levels are difficult to describe in general terms because of the wide range of applications. Depending on compressor type, number of thermodynamic sections, type of gas and application, total pressure ratios can range from less than 2 up to about 200. Discharge pressure can range from sub-atmospheric levels up to 800÷1000 bar.

A centrifugal compressor is an operating turbomachinery in which one or more rotating impellers supply dynamic energy to a compressible fluid with the aim to increase its pressure.

When the inlet nozzle is not axial, an inlet volute is necessary to convey the gas into an annular stream to feed the (first) impeller. Leaving the impeller with an increased velocity and increased static pressure, the gas enters the diffuser (vaned or vaneless), where part of the velocity is converted into static pressure. A return channel (“U” shaped and vaned) is needed to bring the gas in front of the next impeller when more compression stages are provided in line. The discharge system usually makes use of a discharge volute, aimed to convey the gas to the outlet nozzle, possibly with an additional conversion of kinetic energy into static pressure. 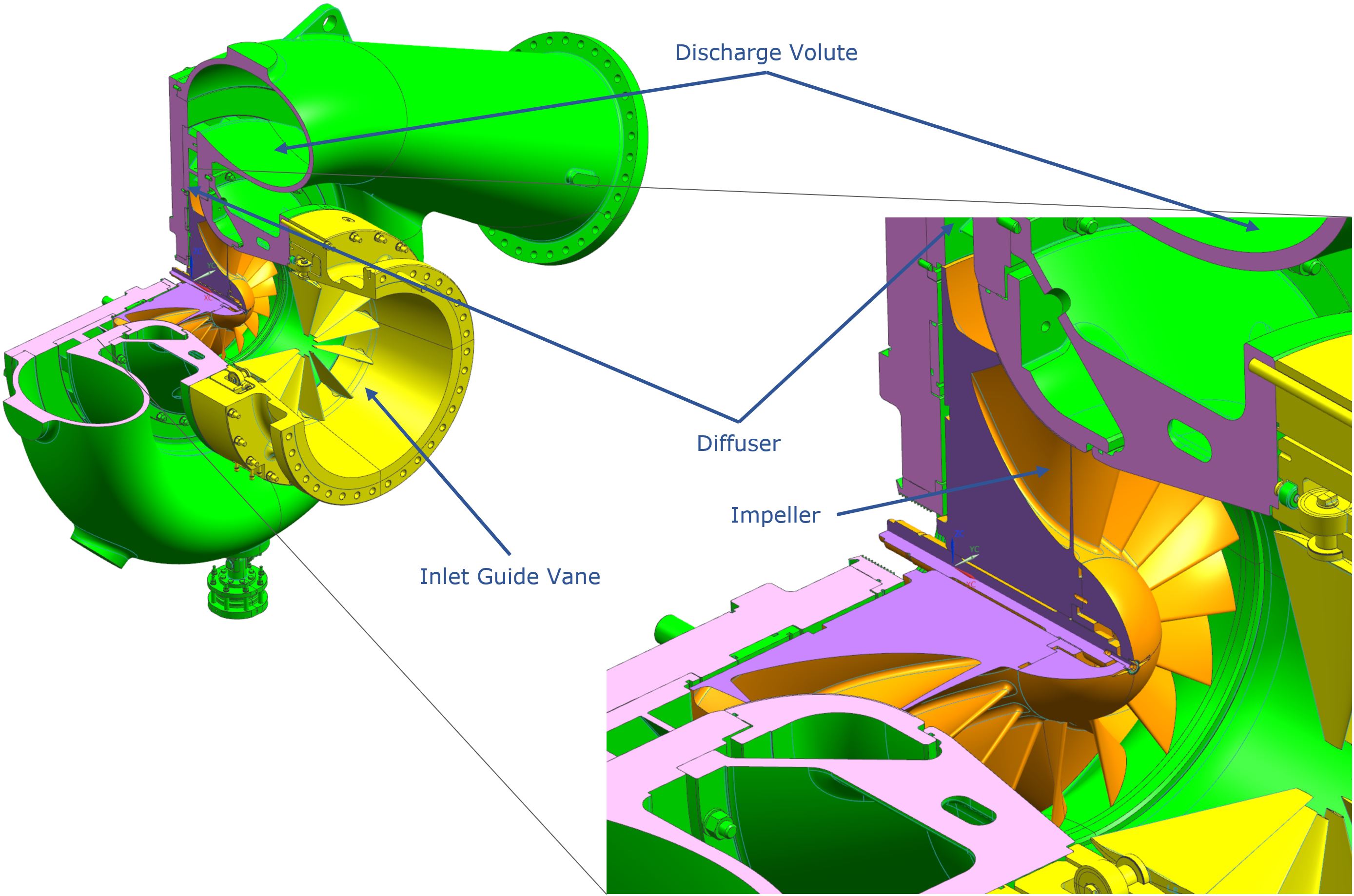 The diffuser can be vaneless or bladed. In the second case the blades can be low-solidity or high-solidity type; the vanes have inner edge in line with the direction of the resultant airflow from the impeller and diverge, to convert the velocity head into pressure energy.

Inlet guide vanes (IGV) are used to control the capacity, changing the angle of the gas flow into the eye of the first impeller.

The compression efficiency can be referred to the polytropic or isentropic transformations (usually the first one).

Compression stages are designed on a specific flow coefficient at the maximum efficiency but can operate in a range limited by surge and choke conditions. When the compressor operates at flow rates different from the design, the efficiency decreases. 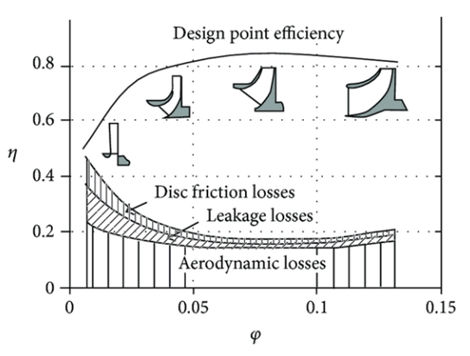 The impeller vanes may be forward curved, radial, or backward curved, but the former are normally used in fans or blowers, and rarely, if ever, in centrifugal compressors.

At the impeller, in adiabatic conditions per mass unit of flow, at the inlet (point 1) and at the outlet (point 2) of the impeller the flow has energy content given by:

The energy increase H12, i.e. the energy transferred by the impeller to the gas has the following expression:

In the diffuser, after leaving the impeller, the velocity of the fluid decreases, changing kinetic energy into static energy. At the end of the diffuser (point 3) the energy content is:

But, since no energy has been transferred passing from point 2 to point 3, it is:

VELOCITY TRIANGLES ACROSS THE IMPELLER

BENDING EFFECT OF THE EXIT BORDER FROM THE IMPELLER BLADING

EFFECT OF IMPELLER BLADE ANGLE ON COMPRESSOR HEAD AND EFFICIENCY

The compressors can be classified in two main categories named:

depending on the absence or presence of an integral gear.

The former are certainly the workhorses operating in most of the industrial processes such as gas transportation, chemical, petrochemical, refinery, pulp & paper processes, while the latter have had a more recent development and market penetration, with an established tradition in few typical applications such as air separation, vapor extraction, CO2, refrigeration, steam compression, process, and plant air (they can also be used for the simultaneous processing of different gases and with expander stages for energy recovery).

For most of the process applications the reference Standard for Centrifugal compressors is the API 617, which specifies many recommended practices and design principles.

Not-Integrally Geared Compressor (API 617 chapter 2) are typically multiple stage machines where impellers are installed in one frame between bearings and operate in series. The compression stage consists of the inlet system (only for the first stage, sometimes including Inlet Guide Vanes), the impeller, the diffuser, and a return channel to the subsequent stage, or a discharge volute after the last stage. All the impellers are located between the bearings, hence they can be named “Between Bearing Compressor”. Also, single stage compressors with overhung impeller and axial inlet belong to this category; the shaft is directly coupled to the driver and the stage is on the opposite drive side end.

Integrally Geared Compressor (API 617 chapter 3) are typically multiple stage machines where the driver is coupled to the bull gear driving 1 or more high speed pinions (up to 5), each one with one or two overhung impellers at the opposite ends. Each shaft rotational speed is defined to optimize the impellers performance. The compression stages include often Inlet Guide Vane and always conveyor, impeller, diffuser, volute, and outlet pipe. 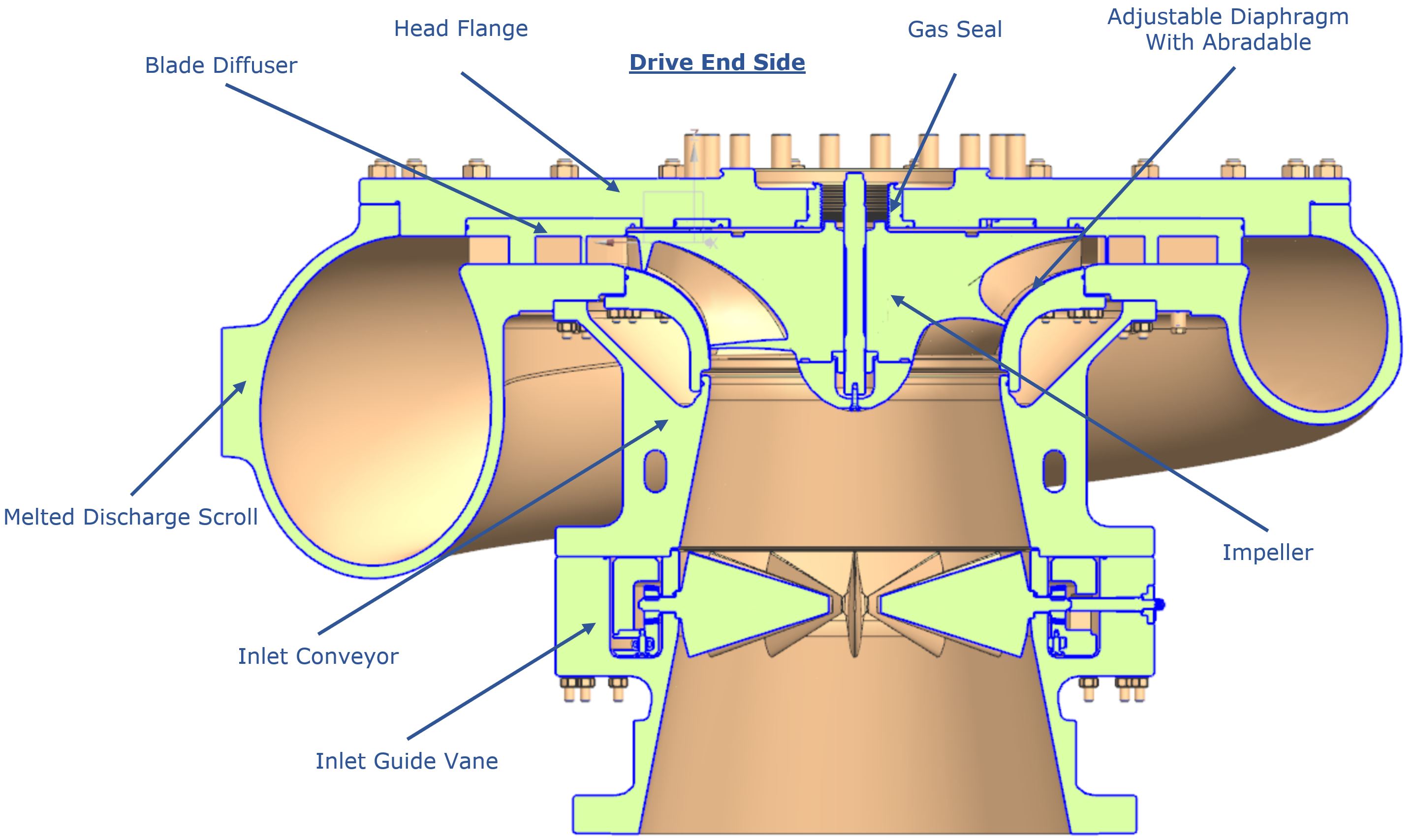 Traditional “Between Bearings Compressors” (belonging to Not-Integrally Geared category) are composed by an external casing containing up to 3 sections, each one with one or more compression stage (up to 10 in total). For each stage an impeller is mounted on the single rotating shaft and the whole rotating assembly is named rotor.

A section includes the set of consecutive stages that do not have inter-refrigeration or side stream injections/extractions of the processed fluid. Each section includes conveyor, inlet volute and several stages with impeller, diffuser and return channel, up to the last one including impeller, diffuser, outlet volute and outlet pipe. The rotating part of the compressor consists of the impeller(s) and the shaft. This rotor runs on two radial bearings (on all modern compressors, these are hydrodynamic tilt pad bearings). A balance piston is generally provided to reduce the axial thrust generated by the impellers. A hydrodynamic tilt pad thrust bearing is used to balance the residual axial thrust.

Some processes require compression trains with several (up to 4) casings. The casings can have different arrangement of the sections:

Straight-Through with side streams

Two main compressor arrangements can be defined depending on casing split:

As it will be explained in the following paragraph, the choice of the external casing layout (with its advantages and disadvantages) remarkably affects maintenance operations.

Maintenance of the horizontally split compressor is very simple, as, after removing the top half casing, the rotor can be removed without disassembling the impellers and then bearings and seals are readily accessible for inspection and repairs. Of course, unless the process connections are placed in the bottom half (as commonly it happens in case of condensing Steam turbine driving), they must be removed before opening the case. Horizontally split casings are usually applied for discharge pressure up to 40-60 bar.

When the pressure is higher, or the molecular weight is too low, vertically split (“barrel type”) compressors are used to avoid gas leakage from the two casing halves of horizontally split compressor. In this case the complete bundle (rotor and split diaphragms) must be removed for maintenance to access the rotor; adequate space is necessary for this operation (also removing of additional casing opposite driver side, if any) but no need to remove the inlet and outlet flanges.

Vertical split compressor used for high pressures, can also have bell shaped casing, with a single vertical end cover, closed with shear rings instead of bolts.

Special arrangements is used for Pipeline Compressors, used for natural gas transportation: normally they have side suction and delivery nozzles positioned opposite each other to facilitate installation on gas pipelines. Axial inlet is also available when the pressure ratio allows for a single impeller.

The maximum number of impellers (up to 10) in Between-Bearings compressor casings is usually limited by rotor-dynamic considerations. Therefore, the maximum amount of head to be generated in one casing is limited. If more head is required, multiple casings, driven either by the same driver or by separate drivers, must be used.

Integrally Geared Compressors are composed by one or more stages, each one including conveyor, impeller, diffuser, volute, and outlet pipe. They are usually inter-refrigerated, being frequently the intercoolers included as part of the machine package. The casing is also attached to the gear box, which is connected to the foundations, the bull gear is connected to the driver by means of a coupling. 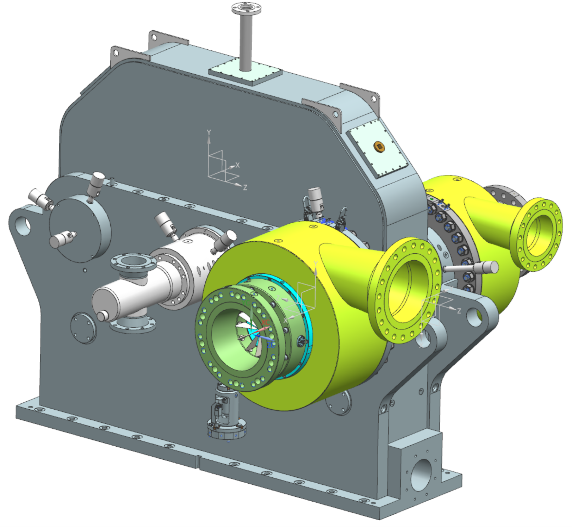 Same compression stage arrangement is adopted also for single stage compressors with overhung impeller (even if they are Not-Integrally Geared).

Usually, overhung compressors do not permit the removal of the rotor without first removing the impeller.

A limitation to the head may be the temperature limits of the compressor; typically, the discharge temperatures are limited to about 200° C. If more head is required, the gas must be cooled during the compression process.

When more than one thermodynamic section is needed, three different design alternatives are available:

Seals are used to keep the gas from escaping through the bearings: so, both shaft ends are to be sealed for Between-Bearing compressors and each shaft end close to an overhung impeller. Except for applications in air or nitrogen compression, where often carbon ring seals or labyrinth seals are used, nowadays all centrifugal compressors use dry gas seals (DGS).

For dry gas seals, the sealing is accomplished by a stationary and a rotating disk, with a very small gap (about 5µm) between them. At standstill, springs press the movable seal disk onto the stationary disk. Once the compressor shaft starts to rotate, the groove pattern on one of the disks causes a separating force, making the seals run without mechanical contact of sealing surfaces. Four different arrangements are possible for DGS: single, double, tandem, tandem with intermediate labyrinth; the last one being applied in the most of applications.

At present, high speed compressor rotors (both “Integrally Geared” and not) are generally equipped with tilting pad bearings (2 Journal and 1 Thrust), since they are the most suitable for stability reasons (capability to resist any unbalancing action of the oil film), while low speed compressor shafts (for instance: bull gear shaft of “Integrally Geared” compressors) are equipped with fixed geometry bearings (for instance, 2 Journal plain type and 1 Thrust tapered land type).